Poult Wood has a reputation for being one of the finest quality Pay & Play courses in the South of England. Set in picturesque woodland, three miles north of Tonbridge, Poult Wood offers a choice of two interesting and challenging courses with Golf Warden on hand, reserved tee time and a great restaurant and bar,…

Poult Wood has a reputation for being one of the finest quality Pay & Play courses in the South of England. Set in picturesque woodland, three miles north of Tonbridge, Poult Wood offers a choice of two interesting and challenging courses with Golf Warden on hand, reserved tee time and a great restaurant and bar, ideal for the regular or casual golfer. Five and Seven Day Memberships are available for those wishing to maximise their time on the course.

The 9 Hole par 3 is a high quality course of 1,221 yards (1,171 metres), starting and finishing in ancient woodland, with many holes giving panoramic views across the Weald of Kent.

There is also a putting green and a driving range which is ideal for warming up before your round or working on particular aspects of your game.  If you are interested in taking part in competitions, why not also consider joining Poult Wood Golf Club.

Tonbridge Town Swimming Pool was officially opened by Colonel Herbert Spender-Clay, MP for Tonbridge, on Saturday 9 July 1910 to an Edwardian audience to whom mixed bathing was a very new and fascinating concept. 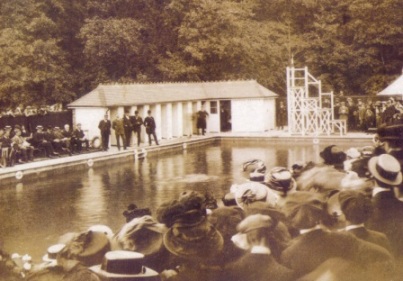 At the opening of this, the country’s first heated outdoor pool, a first class ‘single bath’ cost 3d (that’s 1p in today’s money) and a second class bath was 1d (just half a penny). There were also very strict regulations on how the pool could be used as the rules and regulations stated:

Thankfully, soap and dogs are still not allowed in the pool but how times have changed! 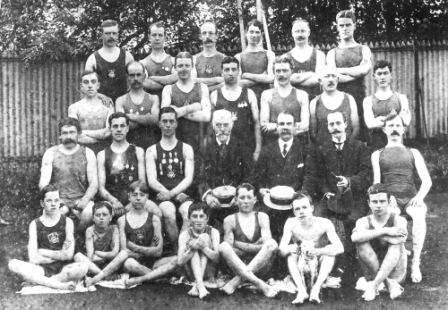 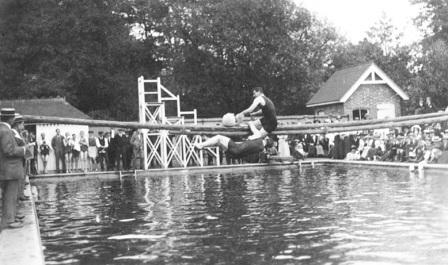 The Daily Mail brought the pool to the attention of the nation in the 1920s after a councillor objected to Tonbridge Swimming Club’s request for men and women to be allowed to swim together from 6am to 10am on Sundays, thus breaching the council’s rule to keep the sexes apart.

A speech by Councillor Donald Clark of Tonbridge, a former Scots Guard officer, which was reported in the local newspaper, caught the eye of the Daily Mail – especially his explanation that he objected “not because I am a Puritan, but in the interests of ladies looking for husbands.”

He said that “By making girls look like wet terriers, mixed bathing stops more marriages than any other cause and much unrest in the country due to the barbarous license in woman’s dress”. Clark was subsequently hired by the Daily Mail to travel around coastal resorts to comment on beach behaviour.

This whole episode lead to a mixed bathing protest by a local Tonbridge resident. An elderly woman carrying an umbrella mounted the pool’s high diving-stage and began a shrill denunciation of mixed bathing and the spectators who encouraged it by their presence. She was pushed into the pool by an indignant bather and had to be rescued!

Mr Clark declared that, from what he had seen, strict Government supervision of bathing places was needed, because mixed bathing “must always have a debasing influence by lowering the respect that should remain between the sexes.”

It all came to nothing when the swimming club’s request was approved by the council, and the sexes swam together for the first time in July 1920.

Tonbridge swimmers still revel in their memories of the original baths which were used by borough residents for 80 years!  Local resident Christina Lawrence’s mother Gladys Lawrence, nee Larkin, was a pupil at the Girls Technical Institute, Avebury Avenue in the late 1920s and spent many cold hours learning to swim at the pool. The pictures below show Gladys lying out on the 6ft diving board – very brave as, as the time, she couldn’t swim a stroke! They also depict teacher Miss Cherry in the white hat and dress, who later, as Mrs Cobell, taught at Tonbridge Secondary Modern now Hillview. 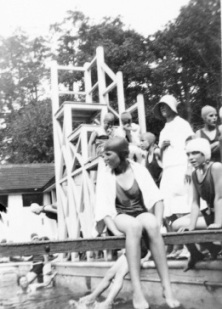 Poult Wood’s Clubhouse is open to golfers and non golfers alike. The focal point is the Bar and Restaurant on the first floor which has a relaxed atmosphere and comfortable surroundings. The Restaurant extends into a light airy conservatory where we offer a wide range of hot and cold food from lunchtime snacks to bespoke menus for special events. Traditional Sunday lunch is particularly popular so please be sure to book in advance.

In the Clubhouse Bar you can sit back, relax and exchange tales of missed putts, and hooked shots. Alternatively you can use it as your local without playing a stroke of golf and enjoy good company and a full range of beers, wine and spirits – Sky Sports is available in the main bar.

Founded in 1901 and designed by Willie Park Jnr, Huntercombe is one of the finest inland courses...

Perfect for golfers of all abilities including new beginners, this course offers golfers an interesting 9...

Founded in 1972, Badgemore Park’s Golf Club has a thriving membership which enjoys an excellent mix of ...

The STGC is not only a unique golf club in the United Kingdom, but we play on what many consider to be on...

Here at Stonelees we have 3 excellent courses for all abilities. The Par 3 course, the Executive course f...

Our focus is on indulging our readers with an abundance of golf and lifestyle information including editorial features from the area’s best Golf Club Professionals, course reviews from home and abroad, coaching tips, latest equipment reviews, tour player news and interviews, and much more!

If you are a business owner we have a range of magazine and digital advertising packages to offer, suitab...

Our focus is on indulging our readers with an abundance of golf and lifestyle information including edito...

If you've got a story, pictures or video send your content....